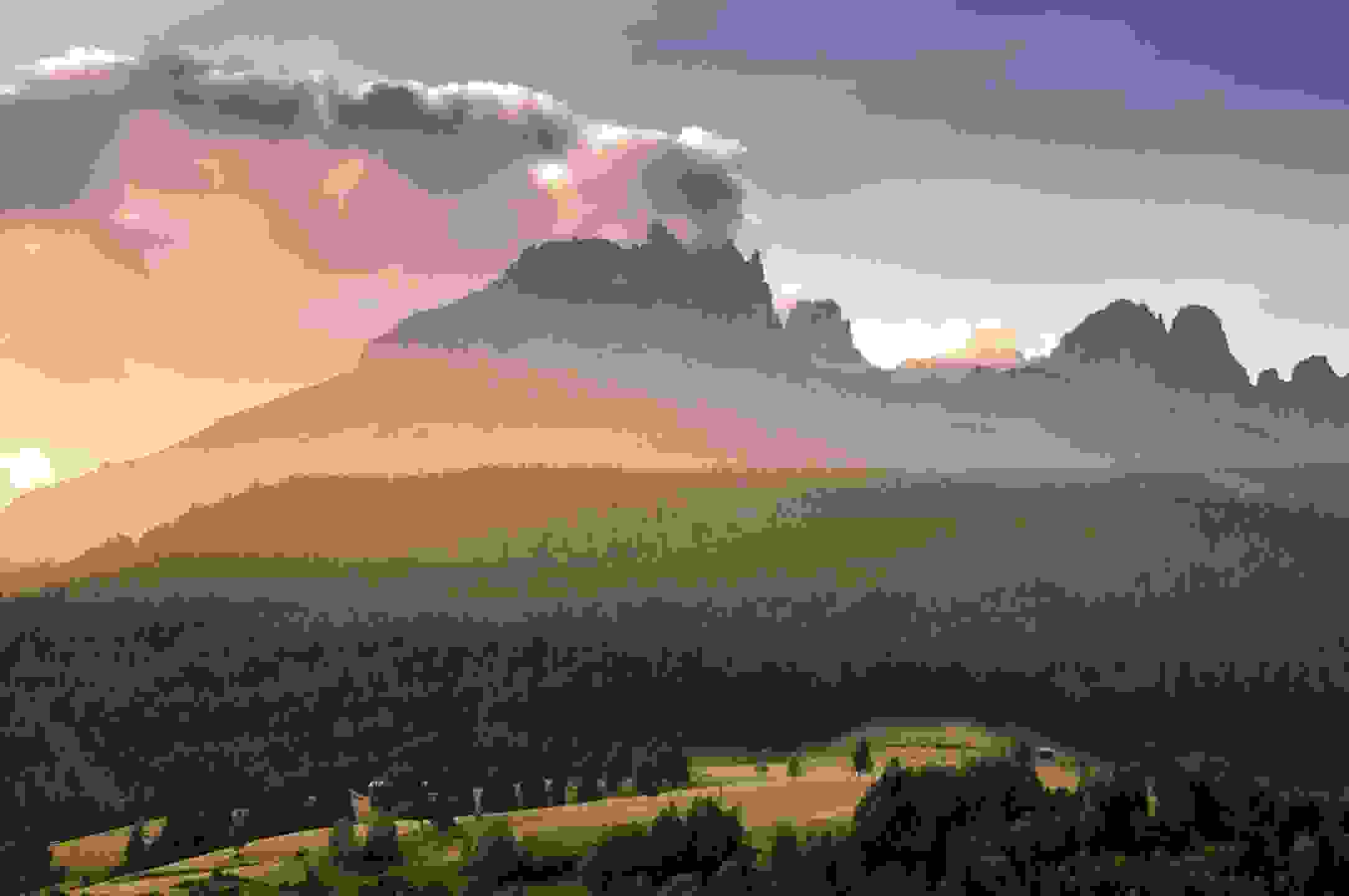 It may come as a surprise to you, but hundreds of thousands of people are coming to Christ in Iran. Jesus is building His church and there is a great revival sweeping through the Islamic Republic of Iran.

Christianity is illegal in Iran and Christians face a lot of persecution at the hand of the authorities for becoming believers. But despite all this, huge numbers of Muslims are leaving Islam and turning to Jesus Christ.

“Right now you can see the results of the Holy Spirit,” Raizal, a believer in Iran, said. “From 1994, there were about 100,000 believers. Right now, there are over 3 million. You can see what the Holy Spirit is doing with the people.”

As churches are banned in Iran, the Christians are using the Internet and Skype to connect to churches in the United States, Germany, and Canada.

“The main church is my house, and through the Internet, I connect to everybody,” Raizal said. “That’s why it’s become like an Internet church.”

The Church in Iran is the world’s fastest growing one and in spite of it being located in the heavily persecuted region of the Middle East. But now many believers are fleeing to Turkey to live safely and freely as Christians.

A Christian refugee in Iran says that they are more free to share the Gospel and praise God openly in Turkey. Another one said it’s like stepping out into light out of the darkness. “It is like coming out of the darkness and into the light. We are so thankful to be able to freely praise our Lord. God is moving,” she added. “Not even Satan’s strongest army can crush the faith of Christians in our country.”

With all the hardships and persecution they are facing, the Christians in Iran are filled with the joy of the Lord and have faith in Jesus Christ, they need our prayers now more than ever before as they face increased persecution for their faith and as their country is going through a war-like situation.

By God’s grace, several Middle Eastern pastors of the Assembly of Loving God (ALG) churches of Bibles for Mideast baptized 94 former Muslims in the Arabian Sea early yesterday morning! The pastors and believers had all fasted and prayed for the Lord’s guidance and protection over the three days leading up to the service.

Going 72 hours without food or drink, they feasted only on the Word of God. Very early as they traveled by six buses to the shore of the Arabian Sea. God blessed them by providing ex-pat evangelical Christians as drivers, all promising to keep the journey and baptisms secret for the safety of the believers and churches. The sea had been churning violently since the evening before, inciting fear in some of those to be baptized. How could they safely get in with such massive waves crashing in? Before beginning the service, all joined hands as the pastors led in prayer.

As soon as they finished, the sea calmed, the waves completely subsided. The people looked up in awe to see unusual illumination from above. Pastors and candidates approached the shore praising the Lord of Creation and salvation. As they proceeded with the ceremony, the Holy Spirit moved powerfully among them.

When all had headed back to shore after the baptism and the final prayers concluded, giant waves began to swell and crash in again. As mysteriously as it had appeared, the glow from above the sea also dissipated. Returning to their churches bursting with joy, the believers celebrated the Lord’s Supper and only after that, broke their fast.

We know without a doubt that God’s protection and care guided and guarded His children as the apple of His eye. Their time of prayer and fasting, added to the prayers of our prayer partners, moved and continue to move heaven. A great mystery we shall all know the answer to one day! Thank you for all your prayers and support.

Kindly continue praying for the newly-baptized and their families. Please also pray for all the leaders, believers and the ministry of Bibles for Mideast as a whole for the great task of winning every Muslim to the fold of Jesus Christ at any cost!

Muslim Imams and Traditionalists Give Their Lives To Christ In Abuja

For for there is none other name under heaven given among men, whereby we must be saved. Acts 4:12

The great harvest is on and God is saving the nations for his own name sake. From Iran to China great revivals, from Bangladesh to Tibet to the remotest villages in India, people are getting saved. Men and women, uniform and non uniform men, the times are here, behold, now is the accepted time; behold, now is the day of salvation (2 Corinthians 6:2).

“The harvest truly is plentiful, but the laborers are few. Therefore pray the Lord of the harvest to send out laborers into His harvest,” (Matthew 9:37).

All the earth will be saved, for this is the Father’s will 2 Timothy 2:4.

African countries are not exempted from this great revival. From Uganda to Algeria, From Egypt to South Africa, the work is on.

Here we present another brisk view of God’s saving work in Nigeria Muslim populace, from Maiduguri to Kogi, from Abuja to Gbogan. Jesus saves! Jesus saves!

Many Imams and great traditionalists gave their lives to Christ in Abuja at an event organised by Rev. Tom. The event was held at Old Parade Ground Abuja. They confessed and believe that Jesus is the son of God and the only way we can be saved.

Recall that Believers Portal reported recently, the story of Thousands Of Muslims who gave Their Lives To Jesus Christ In Kogi State during an evangelical rally. Also, Miss Nabila Umar Sanda Galadima, Daughter Of The Galadima Of Biu, a top traditional leader in Borno State who had an encountered with Jesus Christ while she was a The 200-level student at Bingham University, Karu, Nasarawa State, which led to her conversion to the Christian faith.

This massive conversions of Muslims to Jesus Christ is happening even as Christian persecution increases in the northern part of Nigeria.

Keep praying for the work as the key challenge is men, men that God will use. Men that God uses.

Muslims displaced by ISIS are embracing Christianity thanks to the witness of their children, who share with their parents the love of Christ.

A ministry director working at a refugee in northern Iraq told Christian Aid Mission that recently, 600 children attended a program put on by the ministry, where they received Bibles and heard the gospel.

After learning about Jesus, one 10-year-old boy decided to put his faith in Christ for salvation, the ministry director said.

“That night, we asked the kids to go tell their parents about what they had heard and share the story of Jesus with everyone,” the director said. “Mahmood’s father came the next day complaining to us about our influence in his kid’s decision to accept Christ.”

As a Muslim, the boy’s father was upset and fearful of community backlash after hearing his son say, “I became a follower of Christ.”

“His father had never heard a word about Jesus, so he gave us the opportunity to tell him about Christ and His salvation,” the director said. “Not long after that, he accepted Christ and took Bibles for his wife and two daughters.”

The ministry director revealed that other parents also approached the ministry director with complaints about their children. However, they, too, ended up accepting Chris. He gave them Bibles, and they told others of the peace and joy they had found in Jesus.

“Mahmood’s father now has a Bible study in his house every Friday at 10 a.m. – the Muslim prayer day!” the director said.

Recently, the ministry team traveled to a town in western Iran known to have ties to Islamic extremism. After spending time in prayer, the missionaries went to the house of the village elder, religious leader Kaka Shehab, and told him about Christ. His daughter was ill with asthma, so they prayed for her before leaving him with a Kurdish-language Bible, the director said.

“The next day,” he said, “he phoned us and said, ‘My daughter has recovered, thanks to your prayers. Please, come back to the village and pray in every house and for everyone the same prayer that you prayed for her, and give Bibles to every house in the village.”

The team returned and distributed 500 Kurdish-language Bibles, and they prayed for and explained Christ to all who received them, he said.

“We pray and hope that all the followers of this religion will turn to Christ soon,” he said. “Please Pray.”

The Islamic State jihadi group seized the northern city of Mosul – Iraq’s largest Christian city – as well as Tikrit, Fallujah and Ramadi in 2014, displacing thousands. While a coalition of forces that included the Iraqi army, Shiite militiamen, Sunni tribesmen and backed by a U.S.-led coalition have managed to take back much of the country, many remain displaced. Today, ISIS controls less than seven percent of Iraq, down from the 40 percent it held three years ago.

“Daesh (another name for ISIS) controlled 40 percent of Iraqi land,” Brigadier General Yahya Rasool, spokesman of the Joint Operations Command that manages the campaign against ISIS, told reporters on Tuesday, the Mail Online reported. “As of March 31, they only held 6.8 percent of Iraqi territory.”

CAM notes that ministries based in Iraq are in ideal position to provide aid to those displaced by the ongoing battle against the Islamic State, as they can “purchase local items inexpensively, know secure ways to distribute them and are familiar enough with local cultures to introduce the Bible and gospel along with relief items.” However, they desperately need funding.

Over 50 Healed, Many Turn To Jesus Christ After Pastor Preached In Iraqi Mosque (Photos)

“Despite the region still being in a state of war, large groups of displaced inhabitants are risking their lives trying to return home,” the ministry director said. “Although this is dangerous, due to living conditions in the camps, the lack of resources and the cold weather, many are still trying. We provided some humanitarian support to the displaced that were in the camps, in the roads and in small villages located between the cities of Erbil, Dohuk and Mosul, but the need was much greater than our resources.”

“Jesus said, ‘Let the little children come to me, and do not hinder them, for the kingdom of heaven belongs to such as these.'” Matthew 19:14

‘Prince Of ISIS’ Finds Jesus While Trying To Kill A Christian

A Group Of Lions Save Christians From Execution By Islamic Militants

Muslims Turning To Christ In Great Numbers Through Dreams And Visions

Poland Declares: “Jesus Christ Is Our King, Muslims Should Leave Us”